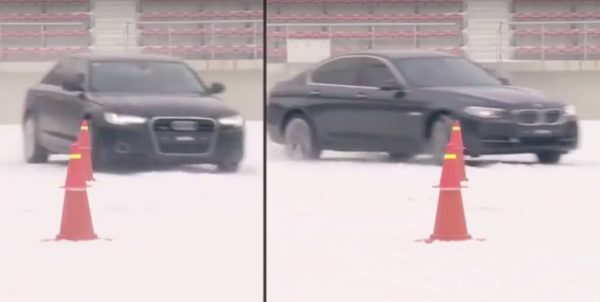 Today we are going to see the snow performance of the Audi Quattro compared to the BMW xDrive and the Mercedes 4MATIC. Audi’s system is using a center differential. A differential is a component which allows the engine’s torque to be divided between the wheels even if they are rotating at different speeds. Usually, one differential is mounted on each axle, but quattro is using one differential to separate the torque between the front and rear wheels. Mounted inside the gearbox it connects the two axles, so when a slip is detected, it delivers variable split of torque depending on the road conditions.

The xDrive is an all-wheel drive system which under normal circumstances distributes the engine power between the front and rear axles in a 40:60 ratio, and changes this figure accordingly when the road surface or overall driving conditions are changed. The 4matic is designed to increase traction in slippery conditions. It’s winter out there, and there is a snow in a lot of places, so let’s watch the video below to find out which car is the best for a snowy conditions.