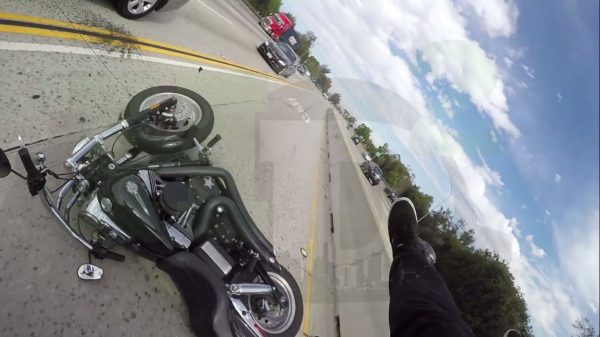 We are about to see a extremely dangerous motorcycle cut off on Los Angeles freeway, event that took place on the morning of May 19th. A blue Toyota cut from the middle lane to bypass some slow-moving traffic, and cut directly into motorcycles path. The motorcycle was going with a high speed when the Toyota appeared, and there was no time for reaction. With only seconds to react, the bike rider pulled in the clutch and stomped on his rear brake pedal, locking up his rear wheel. He let off the brake, but it was too late to maneuver and he plowed directly into the rear of the Toyota.

The impact threw the biker over the handlebars, and he landed on his back on the Toyota’s rear window. The Toyota driver was completely unaware that he’d just caused a nasty crash, so he continued on his way with biker pounding on the rear window, trying to get him to stop. Watch the video below, it is truly shocking.